Sofia is the capital and largest city of Bulgaria. The city is at the foot of Vitosha Mountain in the western part of the country. Being in the centre of the Balkan peninsula, it is midway between the Black Sea and the Adriatic Sea, and closest to the Aegean Sea.

Sofia has been an area of human habitation since at least 7000 BC. Being Bulgaria's primate city, Sofia is a hometown of many of the major local universities, cultural institutions and commercial companies. Sofia is one of the top 10 best places for start-up business in the world, especially in information technologies. Sofia was Europe's most affordable capital to visit in 2013.

Sofia hosts some 1.23 million residents within a territory of 492 km², a concentration of 17.5% of the country population within the 200th percentile of the country territory. The urban area of Sofia hosts some 1.54 million residents within 5723 km², which comprises Sofia City Province and parts of Sofia Province (Dragoman, Slivnitsa, Kostinbrod, Bozhurishte, Svoge, Elin Pelin, Gorna Malina, Ihtiman, Kostenets) and Pernik Province (Pernik, Radomir), representing 5.16% of the country territory. The metropolitan area of Sofia is based upon one hour of car travel time, stretches internationally and includes Dimitrovgrad in Serbia. Unlike most European metropolitan areas, it is not to be defined as a substantially functional metropolitan area, but is of the type with "limited variety of functions". The metropolitan region of Sofia is inhabited by a population of 1.68 million and is made up of the whole provinces Sofia City, Sofia and Pernik, comprising more than 10,000 km².

You can transfer to Sofia directly from Thessaloniki airport with reliable, low cost transfers that our company provides. 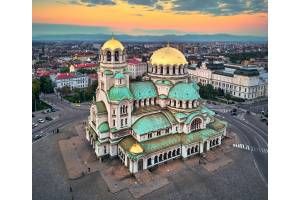