Porto Carras, known as Porto Carras Grand Resort, is one of northern Greece's largest and most famous hotels and holiday resorts. It is located on Sithonia, Chalkidiki peninsula in Macedonia, Greece. It is about 120 km away from Greece's second biggest city, Thessaloniki.

Porto Carras was created by Yiannis Carras, a Greek businessman and ship-owner. Originally it was planned with the renowned architect Walter Gropius, but the construction works started posthumously in 1973. The project brought a revolution to Halkidiki's tourism. Porto Carras Grand Resort includes four major hotels, the 5-star Meliton and Sithonia as well as the bungalow style hotels Marina Village and Villa Gallini. There are also 45,000 olive trees; basketball, football, tennis and golf sports areas as well as a vineyard covering an area of 475,000 m². Porto Carras is home to the biggest private marina in northern Greece, having berths for 315 boats and is built by Finnish manufacturer of marinas and pontoons Marinetek. Visitors can also find one of the largest in South Eastern Europe as well as a thalassotherapy and Spa center. It also contains restaurants, interior and beach bars and an estival cinema theater. The Porto Carras is currently owned by the Technical Olympic Group.

The resort of Porto Carras is near the traditional village of Neos Marmaras; a tourist destination, busy during the summer period, with lots of restaurants, cafeterias and tourist shops.

You can transfer to Porto Carras directly from Thessaloniki airport with reliable, low cost transfers that our company provides. 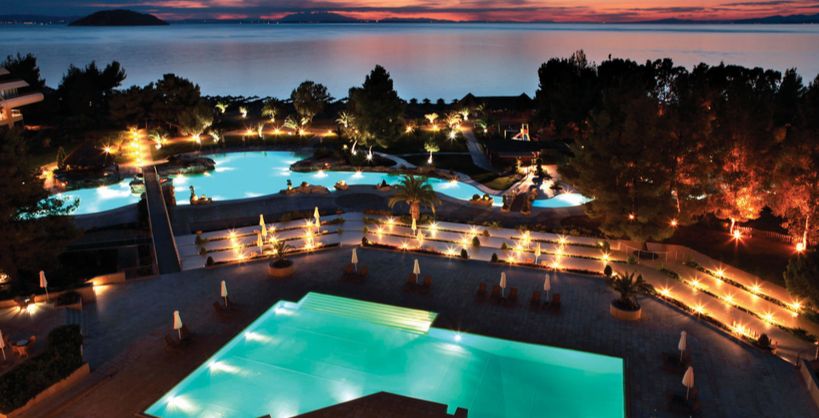