Alistrati is a town and a former municipality in the Serres regional unit, Greece. Since the 2011 local government reform it is part of the municipality Nea Zichni, of which it is a municipal unit.The municipal unit has an area of 129.878 km2. Population: town 2,127; municipal unit 3,088 (2011). Alistrati is situated at the borders of the regional unit of Drama and regional unit of Serres. It's 20 km away from Drama and 45 km away from Serres. Alistrati was built on hills of the mountain range Menikio on an altitude of 325 m. You can realize it from the rising and sloping streets of the town. Remarkable traditional community, the biggest of the area Zichni - Fillida. It's been up-graded to municipality of Alistrati with the "Kapodistrias" law and included the villages: Agioxori, Skopia, Mandili, Lefkothea and R.S of Aggista. Since 2010, Alistrati is part of Nea Zichni municipality.

In the area of the town a plundered ancient Macedonian tomb has been found, which is undamaged even today, and also the traces of an ancient settlement. Alistrati is mentioned in 1460 in a manuscript of the holy Convent of Ikosifissa Pageo as a small town. A traveler from Turkey mentions it with the name Al-Strati in about 1650. There are many views about the etymology of the word "Alistrati". It is said that it comes from the Archistratigos (Michael - Gabriel).

Other people believe that the first name was "Alistrate" which means among streets. Some people give her the meaning of the street towards the sea, through Fillipi. According to the tradition, the name of the town, Alistrati, comes from "Agios Eustratios", the name of a saint, because it is believed that Alistrati was built on the ruins of a church devoted to Agios Eustratios. Alistrati was built by the people of the ancient town Alektrioupolis, situated 2 km southwest from Alistrati, where you can find the Monastery of Agia Kyriaki nowadays. That town lived until the mids of the 19th century as a small settling near the big number of roosters, which crew and made their presence audible in the area around. When the town was struck by an epidemic at the beginning of the Turkish occupation, most of the inhabitants moved to the today's Alistrati place.

At the beginning Alistrati was a small village, but it soon changed into a small town because of its geographical position and the merchandise, as well. It enjoyed great prosperity during the Turkish domination as it was a tobacco's industry centre and the religious and cultural centre of East Macedonia. After the revolution of 1821 against Turkish occupation, it was a transport, trade station between the area Serres-Drama-Kavala and that was now a remarkable business and trade activity had developed. It had also developed into an intellectual and religious center especially after it had been the seat of the See of Fillipi-Drama and Zichni (one can see the graves of three plelates in the yard of the Ag. Athanasios church) and after the establishing of the famous for that time Greek Central School of Alistrati where pupils from all the area of eastern Macedonia came to study.

Today Alistrati attracts a lot of tourists not only because of the famous cave but because of all the natural beauty around it as well. The small neighborhoods with the narrow streets and the typical up-hill alleys, the hospitable inhabitants, the nice old Square, the beautiful belfry and the elaborate old reredos of the church of Agios Athanasios are tokens of the inhabitant's taste. There are also a lot of houses built in neoclassical or Macedonian architecture and picturesque narrow streets. So as the visitor strolls around the village he can travel back into time. Visitors can enjoy their stay here in some nice places, such as Hotel Boziki or the hotel run by the Women Cooperative etc. All these places meet the visitors’ update needs. There are also many cafes, and tavernas with delicious, traditional dishes. And all these things combined with the excellent climate (there is very low humidity) help the visitors have a great time and escape from their everyday life routine.

The hill of Agios Konstantinos is situated north of Alistrati and at a very short distance. A place full of pines with am unique panoramic view. In front of and almost under its feet the plain of Drama is spread while you can have a clear view of the surrounding mountains and when the atmosphere is clear you can discern the peak of the mountain Orvilos in the north and Thassos island in the southeast. The place is a municipal park where the visitor apart from spending hours of relaxation someone has the chance to see the animals of the zoo which move around the spacious protected area. 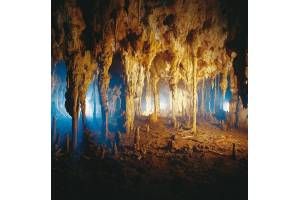 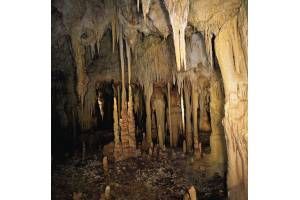 You can transfer to Alistrati Cave directly from Thessaloniki airport with reliable, low cost transfers that our company provides.